Yumeko Jabami (蛇喰 夢子 Jabami Yumeko) is the protagonist of the series. She is a beautiful and mysterious transfer student to Hyakkaou Private Academy who initially appears modest, but shows a maniacal passion for high stakes gambling, as shown when her eyes glow red. She has long, straight black hair with bangs styled in a hime cut and red eyes. Although she dislikes games where the outcome is predetermined, she can quickly deduce how such games are being manipulated in her opponents' favor and, by doing so, she devises strategies that more often than not turn the tables on them.Ch. 1 Her increasing wagers and activities soon draws the attention of the student council. It seems her birthday is July 1st even without many records of her family backgrounds. She lives alone as her sole relative, her older sister, has been hospitalized long-term.Ch. 10 When she is reduced to pet status, although she could easily pay her debts due to her family wealth or from her winnings, she chooses not to, so as to be involved in more games and so she can also freely challenge the student council president.Vol. 2, 3 She is voiced by Saori Hayami in Japanese and by Erika Harlacher in English. 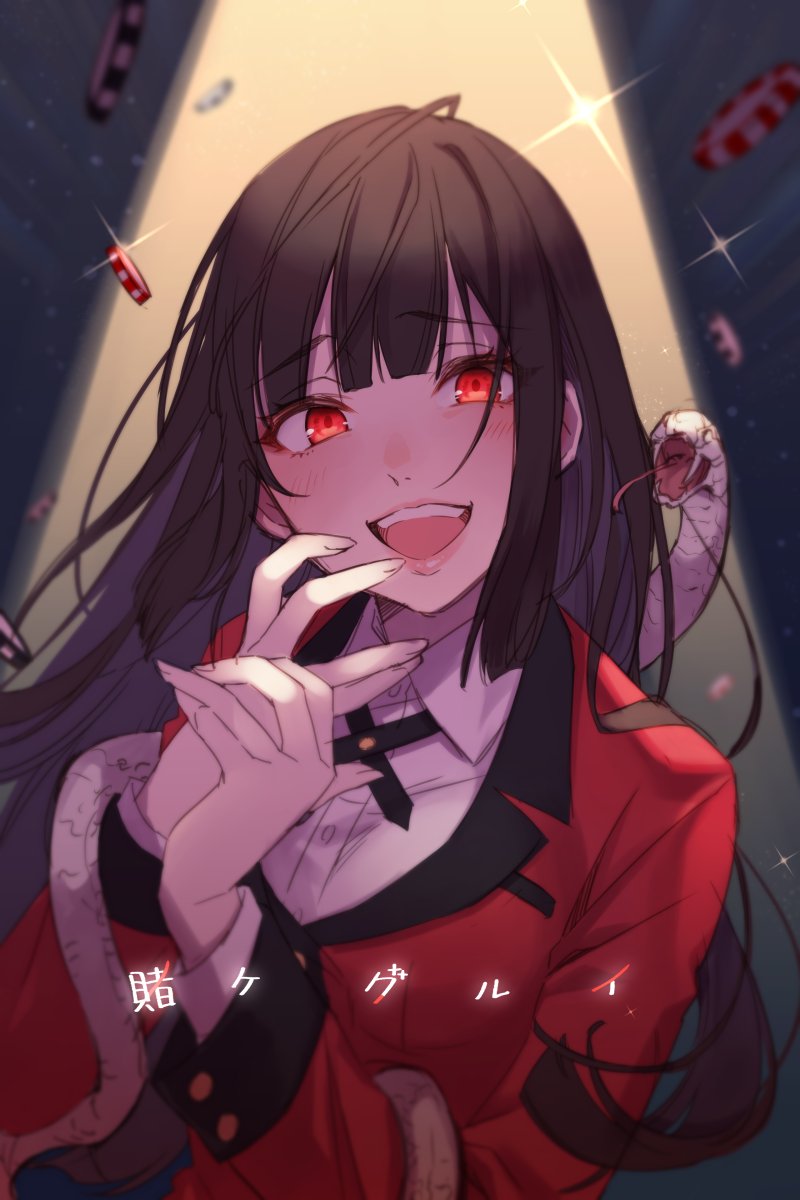 Yumeko is a very attractive pale-skinned girl.She has long black hair that is styled in a hime-cut and brown eyes, along with two curved streaks at the side of her face and brown eyes (In the anime and manga, her eyes are sometimes seen glowing red whenever she becomes excited). She wears the standard female Hyakkaou Private Academy issued uniform; a red blazer with black trim lining the cuffs and collar, a white button-up dress shirt, a dark pleated skirt, a tie and black/grey coloured stockings. As well as the academy's issued footwear, brown coloured loafers with black soles. She also sports pale pink lipstick, red painted fingernails (sometimes seen as pink) and a ring around her left thumb.

Yumeko is shown to be a very upbeat and charismatic character who consistently attracts the affection or interest people around her. Not only is she able to befriend those who previously disliked her, she is able to catch the attention of the entire student body. She does just that on her very first day of school and manages to continue doing so on nearly a daily basis. Every time she notices an opponent cheating in games, her button gets switched to a bloodthirsty side of her, usually seen when her eyes turn red and she frightens her opponents.